IOF in Nabi Saleh on 21 January 2015. – the Israeli army raided NabiSaleh in the morning, firing live ammunition/teargas and arresting Eyad Tamimi (49) and Hamza Tamimi (25) from their houses

Activists report IOF invade village with four jeeps and at least 18 soldiers before the weekly demonstration began. The fired large amounts of teargas at unarmed protesters. In particular the valley was filled with teargas making it difficult for people to breath. Residents reported that the teargas was particularly strong, with many suffocated by the gas due to the large quantities and strong winds. IOF continue to invade village and harass village for several hours after the conclusion of the demonstration.

Report and photos from Haim Scwarczenberg:

“The weekly protest in Nabi Saleh followed a week of IDF raids in the village and arrests of residents, as well as what seems like the introduction of a new weapon that contains an unknown organge-colored chemical. Villagers and solidarity activists marched with the Palestinian and Egyptian flags to protest against arbitrary arrests of civilians. The IDF responded with barrages of tear gas, rubber-coated steel bullets and rounds of live ammunition (“tutu”) in order to disperse demonstrators. No major injuries reported.”

Photos and text by Haim Schwarczenberg:

“Protesting the systematic detention of children and minors by the IDF, residents of Nabi Saleh and solidarity activists marched today, demonstrating against the recent prison sentence given to 14 years old Malak al-Khatib. Malak was accused of stone throwing, and was pressured into signing a plea deal which handed her a two-months prison term and 6000NIS fine. She is currently held in Hasharon prison, with other female Palestinian political prisoners. The IDF attempted to disperse the marchers by using tear gas, rubber-coated steel bullets and live ammunition (“tutu”). One child was injured from a live bullet and was taken to Salfit for medical treatment.”

Local and International protesters participated in the peaceful weekly demonstration in Nabi Saleh. The reprisals didn’t made wait. The patients demonstrators suffered again the Israeli violence. The soldiers shot protesters with live bullets, pushing back them. Moreover, threw tear gas bombs leaving tens wounded. But, in spite of this, the demonstration continued shouting for stopping the violence, collective punishment and terror against humanity which Israel practice every day against Palestinians

For five years now, residents of Nabi Saleh have been denied access to their spring. A source of irrigation for their crops, as well as a place for recreation: al-Qaws spring was the heart of this farming community.

The illegal settlement of Halamish was established on the land of Nabi Saleh, and the neighbouring village of Deir Nidham in 1977; since then, and particularly in recent years, the settlement has been growing, stealing more land, and finally denying the villagers access to their spring.

For five years, every Friday, residents of Nabi Saleh gather with local supporters, Israeli and international activists, to protest against the theft of their land and the denial of access to the spring. Sometimes, with bravery and determination alone, these villagers have managed to reach the spring, stealing a few precious moments before the arrests and reprisals reach their climax.  Most of the time, the repression from the Israeli Occupation Forces is too great to get anywhere close.

Today in Nabi Saleh the villagers gathered at the petrol station on the edge of the village; undeterred by the rain, they were ready for the weekly demonstration. The weekly show of strength and determination to fight for what is rightfully theirs.

We walked down the road, men, women, and children chanting in Arabic and English, voicing our common determination to end this occupation. The Israeli military were waiting at the bottom of the road, blockading the access to the village. As soon as we were in range the tear gas started. A peaceful march met with poisonous tear gas from the very beginning. Many attempted to throw and kick the smoking toxic canisters away, but the sheer quantity meant we had to retreat quickly.

As the smoke cleared, we tried to walk forwards once more. But then the unmistakable crack of live ammunition. We ran back. Without provocation, live ammunition was aimed at a group of peaceful protestors. Fortunately this time the bullet didn’t find a body, but the Israeli Occupation Forces lack of respect for human life is truly frightening.

Two months ago four protestors were injured at this peaceful demonstration, adding to a long list of villagers who have been hurt or killed by Israeli military bullets whilst trying to fight for their rights. The army have been using live ammunition at this group of families and demonstrators more and more frequently during the last year. So the villagers’ weekly demonstration to struggle for their most basic rights – land and water – has been reduced to a short walk to become the target of bullets. Each week villagers risk their lives because they will never accept the theft of their land. Each week they are shot at because they want access to the spring which has been the source of life for their community for generations.

Israeli occupation forces once again attacked the weekly protest in Nabi Saleh against the occupation.  The non-violent protest marched towards the village’s land which has been confiscated by the illegal Israeli colony of Halamish.  Residents and supporters chanted slogans condemning the occupation and settlements.

Immediately after the arrival of the rally off the land confiscated by the occupation, Israeli occupation soldiers fired on the unarmed protesters with rubber coated steel bullets and tear gas, wounding dozens of cases of suffocation. 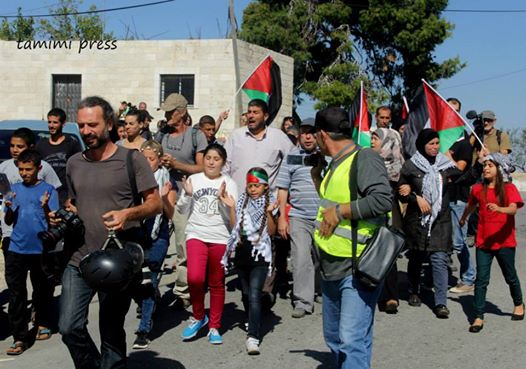 The attack by Israeli forces comes a day after Israeli forces detained five — including two Palestinian women and three foreign journalists — and lightly injured a French journalist during a protest in the village, which has held weekly protests for four years against Israeli confiscation of village lands.

Israeli forces arrived “suddenly” on Saturday to close the village entrances and then targeted locals nearby, shooting a young man with a live bullet and injuring a 45-year-old woman after beating her, local popular resistance group “Intifada” said in a statement.

The woman was identified as Wijdan al-Tamimi, while the injured young man was not identified.

After declaring the area a “closed military zone,” Israeli forces shut the main streets of the village, closing an iron gate on the main road and placing boulders on other roads so as to prevent Palestinian traffic.

Additionally, they fired stun grenades into the village’s streets, damaging a number of cars, the group said.

The group said that the attack was part of an escalation in military violence against the village in recent months.

The village is the site of weekly protests against the Israeli occupation, with residents demanding that lands confiscated by Israeli forces to build a settlement be returned to them.

An Israeli military spokeswoman said that “as a result of a violent riot” on Saturday afternoon, “one of the two gates of Nabi Saleh was temporarily closed.”

This Friday’s demonstration was titled “Palestine is our mother and our freedom is our dignity” commemorating mother’s day, as well as the 46th anniversary of the Battle of Karameh, in which the Fateh resistance fighters defeated the IOF. Palestinians, accompanied by Israeli and international solidarity activists, marched from the centre of Ramallah-district village of Nabi Saleh is solidarity with the jailed Druze draft refuser, Omar Sa’ad. Protesters held banners and chanted slogans in support of the Druze anti-draft campaign and national unity in the face of occupation.

The IOF attempted to disperse the march with barrages of tear gas, rubber-coated steel bullets and stun grenades. A medic suffered injuries from rubber bullets to his chest and leg and required medical attention. A few other demonstrators, including minors, were also injured from rubber bullets while other suffocated from tear gas. 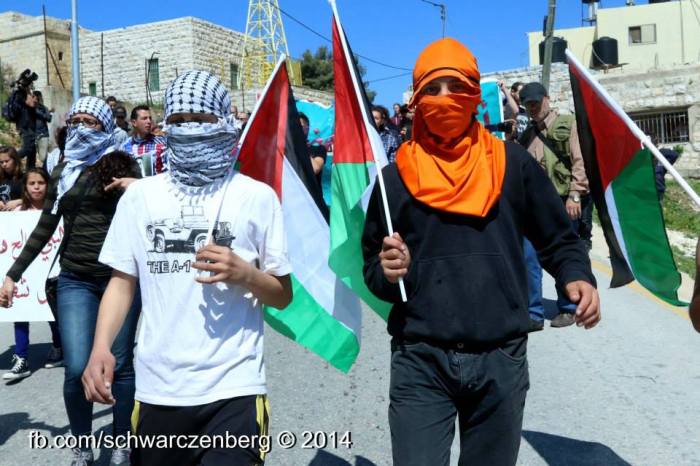 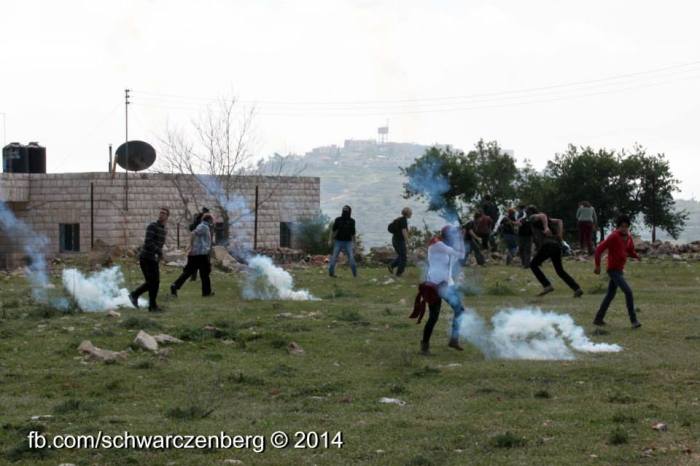 Honoring Mu’taz Washaha from Bir Zeit, an activist murdered by the IOF a week prior, Palestinians and solidarity activists marched from Martyrs’ Square at the centre of Nabi Saleh towards the main road. Marking also international women’s day, prominent female protesters also confronted the soldiers who attempted to brutally disperse the march. One woman was severely beaten and transferred to a Ramallah hospital. Several other protesters were injured from rubber-coated steel bullets. 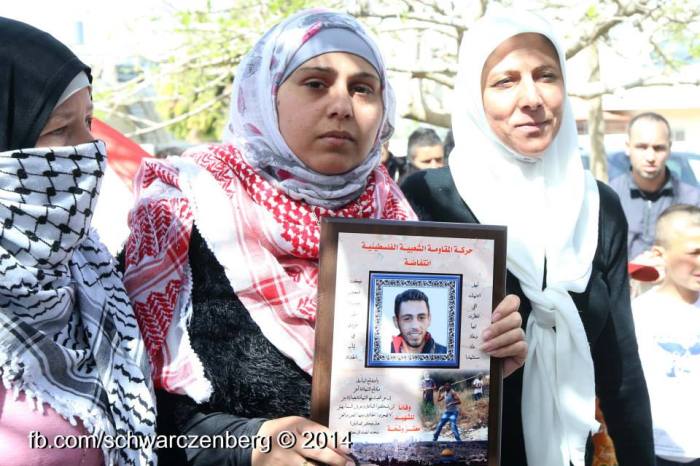 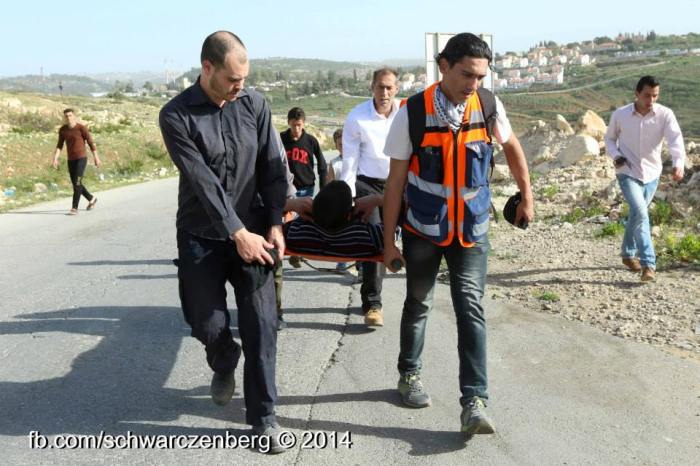 Around 2 a.m. the Zionist Israeli forces violently raided the village of Nabi Saleh searching brutally in the houses for ‘wanted’ people by using an album of photos to identify youth from the village.. 5 people were arrested:

Photos from the wall of Tamimi Press Office and Media were also confiscated. The photos were used to show visitors the violations and abuses carried out by the Israeli Forces against the people and the village of Nabi Saleh.

***Update on arrests in Nabi Saleh***

Muhammad ‘Atallah al-Tamimi, who was arrested last night at his home in Nabi Saleh, was released today on 1000NIS bail. The hearing for Basel Tamimi, 16, arrested during the same raid, is set for tomorrow. However, his father was detained after a verbal altercation with an IOF officer. In addition, Islam Dar Ayub al-Tamimi was sentenced today to 15 months in the occupation prison.