Reports from Tamimi Press indicate that Sunday evening the Israeli army invaded the Palestinian town of Nabi Saleh in the West Bank. They fired live ammunition and gas bombs and clashed with local youth.

The Israeli forces were described as “firing ammo and gas canisters indiscriminately on homes.”

In addition to the soldier attacks, Israeli settlers from the illegal settlement Halamish attacked cars on the main road of Nabi Saleh.

No reason or justification for the Israeli invasion has been given, and there are no confirmed reports of any injuries yet.

Nabi Saleh has been attacked many times in recent weeks by settlers and the Israeli army.

Muheep Barguthy, a photojournalist from Al-Hayat, and David Cronin, an author and correspondent for the International Press Service, were arrested in the village of Nabi Saleh last Friday, during a weekly demonstration. Three Palestinian villagers, Eyad Tamimi, Rafat Tamimi and Malik Tamimi were also arrested.

Last Friday, international and Palestinian activists witnessed what has become routine in Nabi Salih—the disproportionate use of force used by the Israeli army against demonstrations in the village.

Protests in Nabi Saleh started in 2009 in response to the illegal seizure of the land surrounding the village—including the spring named Ein al-Qaws—by the nearby settlement of Halamish. Before that, the spring was owned by a Palestinian resident of the village, Bashir Tamimi.

By seizing control of the spring and its surroundings—and denying Palestinians access to their land—the Israeli settlers, who receive significance support from the Israeli army, have taken almost all resources away the residents of Nabi Salih.

This tactic is nothing new.

END_OF_DOCUMENT_TOKEN_TO_BE_REPLACED

Settlers and the military have violently attacked the village of Nabi Saleh three times in the past week, burning fields, shooting live ammunition and raiding houses in the village.

Following a fire that burned through fields belonging to residents of Nabi Saleh near the Jewish-only settlement of Halamish on the afternoon of Monday the 25th, armed settlers blocked the adjacent main road, using violence to prevent the passage of Palestinian cars.

A family of four was viciously attacked, causing injury to an old woman and a 19 year-old woman, who went into shock.

As Palestinians started gathering, Israeli soldiers who were present at the scene reacted by trying to push them away and back to the village instead of removing the settlers, eventually invading the village. The soldiers shot immense astounding of tear-gas, rubber-coated bullets and live ammunition at houses and people in the village, luckily causing no injuries. The incursion finally ended at 11 PM when the soldiers left.

The following day, Tuesday the 26th, at roughly 2 in the afternoon, settlers tired to set fire to an olive grove belonging to a farmer from Nabi Saleh. As youth from the village noticed the settlers and quickly descended from the hilltop village to stop the fire, armed settlers open fire on them from automatic assault rifles.

The army, in turn, then staged another incursion into the village – the second in two days – again using immense amounts of tear-gas and live ammunition. Armored military vehicles went in and out of Nabi Saleh for no foreseeable reason. As the sun started setting over the village, soldiers took over a house in the center of the village. One of the tear-gas projectiles shot by the soldiers shattered a window in one of the village’s houses and set fire to the mattresses it landed on.

Clashes between soldiers and local youth continued sporadicly until the soldiers left shortly after 9 PM.

No disturbances were recorded on Wednesday, until the Israeli army staged a night raid on the village at 1:30 in the AM of Thursday the 28th. The soldiers raided and searched the houses of imprisoned village leaders Bassem and Naji Tamimi, as well as that of Mahmoud Tamimi without showing a search warrant. While in Mahmoud Tamimi’s house, the force’s commander threatened him that raids will be held nightly until “troubles” in the village cease and desist. Clashes, again involving the use of live ammunition by the army continued through the night, until the soldiers left shortly before sun rise.

END_OF_DOCUMENT_TOKEN_TO_BE_REPLACED 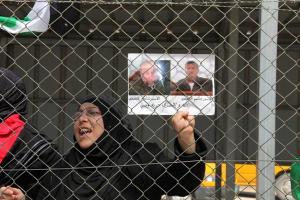 Photographs by Wafa Images: Nabi Saleh residents and supporters outside Ofer demonstrating in support of Naji and Bassem Tamimi.

Video:  Residents from An Nabi Saleh and their supporters outside Ofer Prison demonstrating in support of Naji Tamimi and Bassem Tamimi who have been arrested by the Israeli Occupation Forces for their non-violent activism.

This Friday Nabi Saleh demonstration against the settlements and occupation was joined by a group of West Bank March 15 activists and was larger than usual. Some 80 people marched through the village’s main street and then crossed into the fields to reach the spring and land being stolen and threatened by settlers. This turn to the fields also helped the protesters avoiding being fired at by the Israeli soldiers who awaited them down the street. Even before the marchers could reach the village’s main road, Israeli soldiers came to stop them, throwing stun and tear gas grenades and shooting rubber-coated metal bullets at a non-violent protest. This, however, did not deter the protesters, who kept standing in front of the soldiers in defiance. The soldiers than turned to violently arresting two Palestinian protesters and attempting to arrest a third one.

END_OF_DOCUMENT_TOKEN_TO_BE_REPLACED

Minutes after Bassem Tamimi entered his home to prepare for a meeting with foreign diplomats, dozens of Israeli soldiers stormed his house at the West Bank village of Nabi Saleh and arrested him. The soldiers tried to prevent Tamimi’s wife, Nariman Tamimi, from filming the arrest, hitting her and trying to grab the camera from her. When she passed the camera to her 10 year-old daughter, the soldiers grabbed it from her using violence and threw it outside in the mud.

END_OF_DOCUMENT_TOKEN_TO_BE_REPLACED

Naji Tamimi during a demonstration in Nabi Saleh. Picture credit: Nariman Tamimi
Naji Tamimi, member of the Nabi Saleh popular committee and one of the leading figures in the struggle against the annexation of village lands by the nearby settlement of Halamish, was arrested last night during an army night raid on the village. The military also searched the home of another popular committee member, Bassem Tamimi, absent at the time. These last few weeks saw the army waging an extensive arrest campaign against village residents, specifically targeting minors.
END_OF_DOCUMENT_TOKEN_TO_BE_REPLACED

On Friday, 5 February, approximately 20 international and Israeli activists joined the residents of the village of An Nabi Saleh in the Ramallah district for the village’s regular non-violent demonstration against land confiscation and Israel’s occupation policies.  The village had been placed under curfew since 7am, with all roads blocked by the Israeli military. 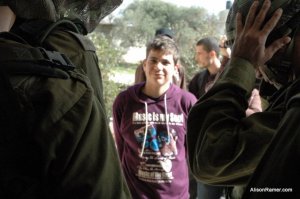 On a sunny day people usually stand outside or sit in the direct sun in the waiting area at the Ofer military court. To observe a trail at Ofer, one must enter the facilities and, in a way, become a prisoner. Visiting diplomats and human rights officials alike, are allowed to bring only money and cigarettes into the court area. Trials are given times in two vague categories –  before the lunch break and after. Often a trial is listed for ‘before the lunch break’ and so observers will arrive at the court around 9 a.m., only to find that it has been postponed until after the break, leaving the unlucky observers with five to six hours to kill in what is basically a large prison yard – buckled asphalt surrounded by watchtowers shaped like World War Two-era pillboxes, and chain link fences topped with rolls of barbed wire.

Islam Tamimi, a 14 year old child from Nabi Saleh who was pulled out of his bed by invading soldiers at 3 a.m.three weeks ago, had a hearing yesterday regarding the details of his upcoming trial. In a crowded room full of human rights observers from Palestinian legal organizations and woman from the Israeli organizationMachsomWatch , Islam was brought before a judge. A child swimming in an adult prison uniform, Islam fidgeted as children often do when a lot of attention is focused on them.