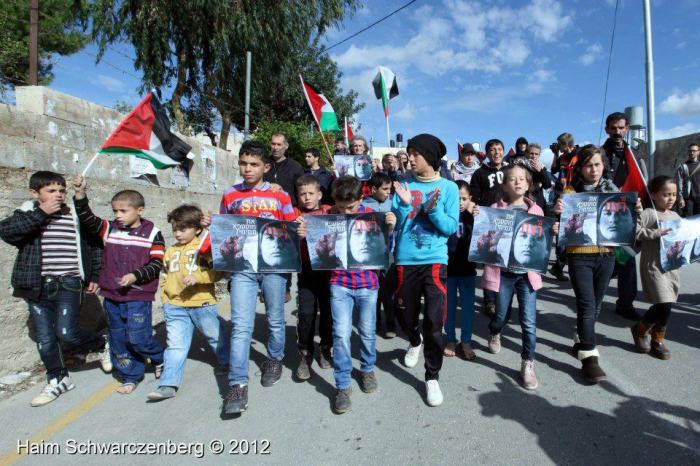 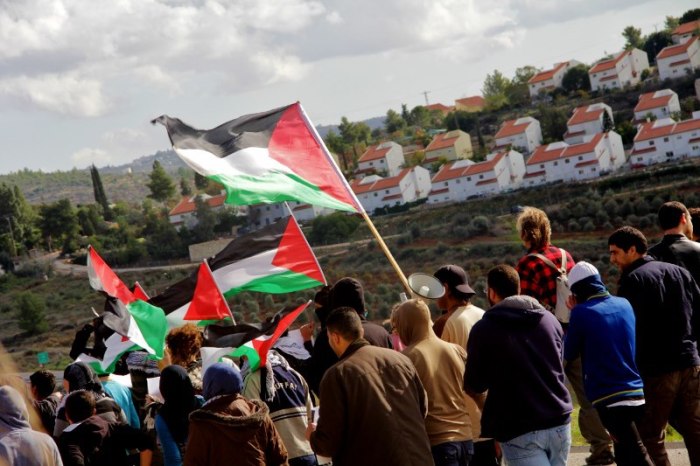 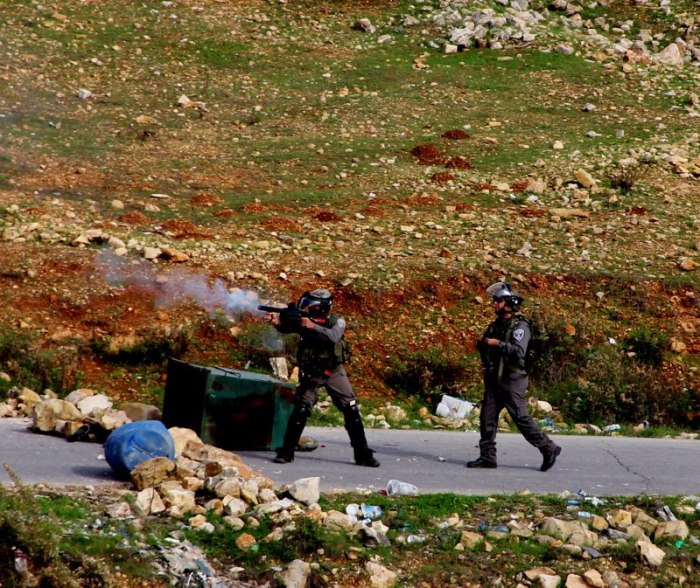 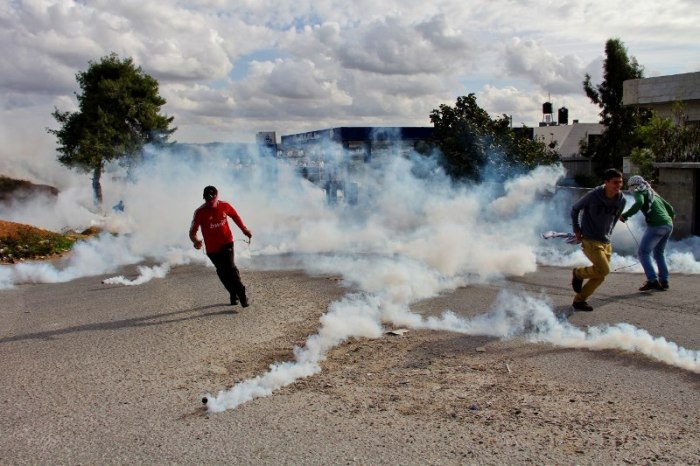 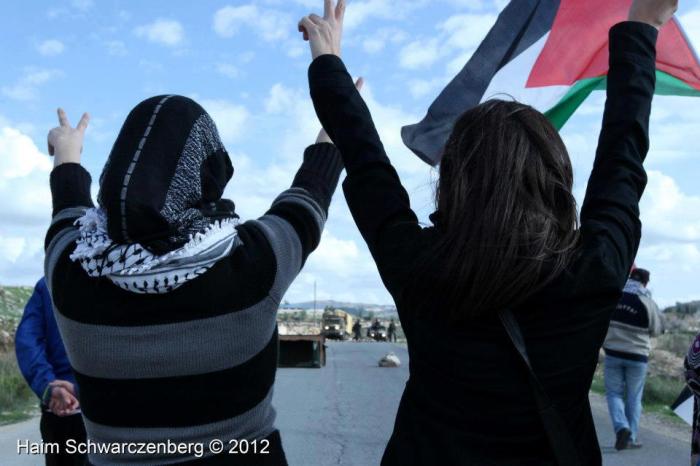 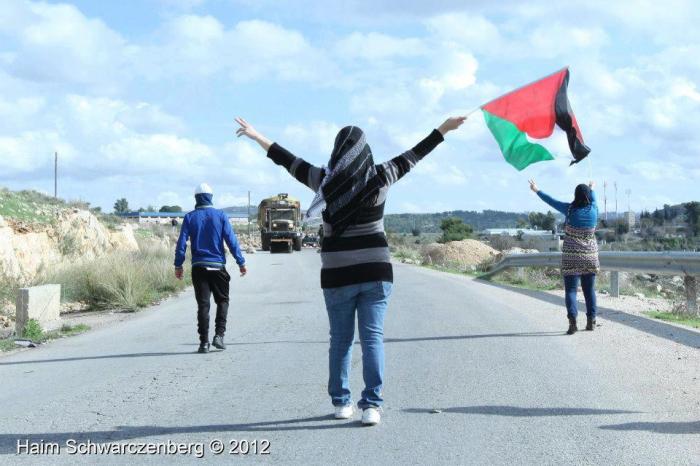 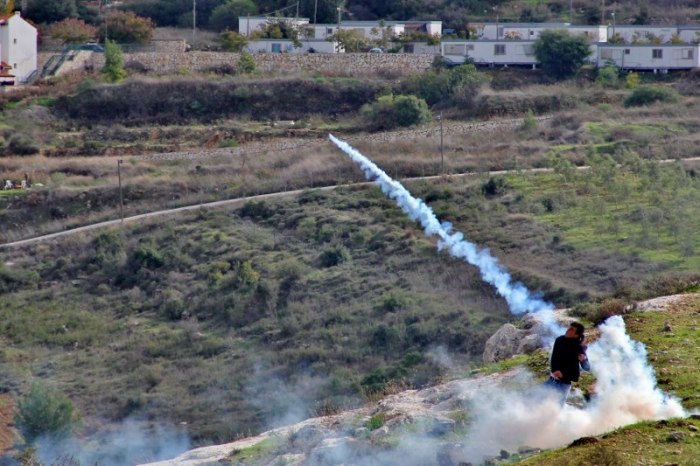 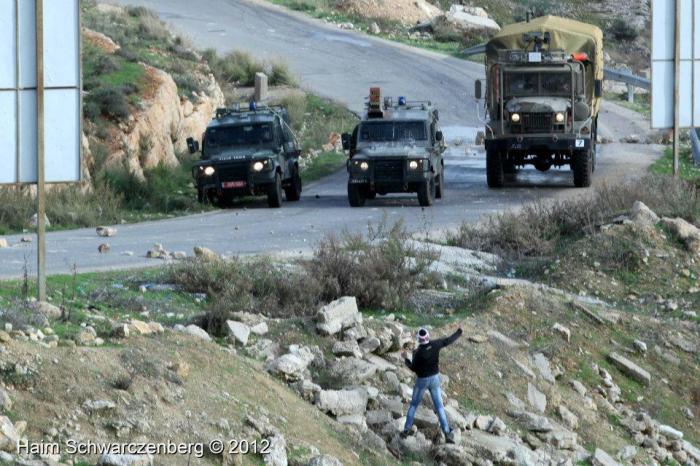 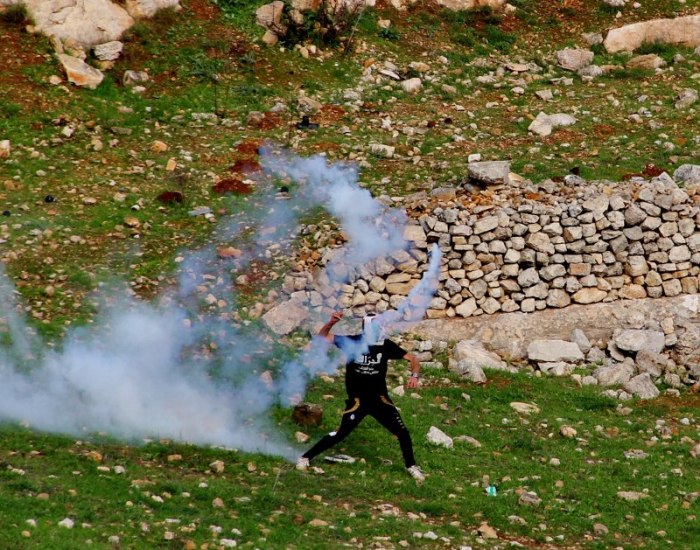 At the weekly demonstration in Nabi Saleh two Palestinian women stand their ground in the face of the infamous skunk truck. The skunk truck is a mounted water cannon that sprays a foul smelling liquid at high pressures.

Large military forces raided the village of Nabi Saleh last night and maintained presence in the village until dawn, only to conduct another raid during the demonstration today.

Some several dozen protesters, residents of Nabi Saleh, accompanied by Palestinian, Israeli and international supporters participated in the weekly protest in the village this week. Shortly after the Friday prayer, as the demonstration was only beginning to march towards the village’s confiscated lands, the army entered the village with great force.

Shooting large amounts of tear-gas projectiles, rubber-coated bullets, soldiers occupied a space at the center of the village and remained there for several hours, effectively imposing a curfew on the village. Protesters were thus blocked with almost inability to move inside, not to mention out of Nabi Saleh. The army also used the “skunk”, a water canon of foul-smelling liquid, spraying it directly and intentionally into residential houses. Small clashed erupted, which ended after the army finally retreated. No arrests or injuries were reported.

Since its establishment in 1977, Halamish colony has continued to expand and steal more Palestinian land.   In 2008, the residents of An Nabi Saleh challenged the building of a fence by the colony on private Palestinian land and which prevented Palestinians from accessing their land.

The Israeli courts ruled that the fence was to be dismantled  Despite the Israeli court ruling, the colony continued to illegally annex more Palestinian land.  In the summer of 2008, the Israeli colonists from Halamish seized control of a number springs, all of which were located on private Palestinian land belonging to residents of An Nabi Saleh. In December 2009, the village began weekly non-violent demonstrations in opposition to the illegal Israeli colony of Halamish annexing of the  fresh water springs and stealing of more of the village’s land.

Since An Nabi Saleh began its demonstrations, the Israeli military has brutally sought to repress the non-violent protests, arresting more than 13% of the village, including children.    In total, as of 31 March 2011, 64 village residents have been arrested.  All but three were tried for participating in the non-violent demonstrations.  Of those imprisoned, 29 have been minors under the age of 18 years and 4 have been women.

By Anarchists Against the Wall: 25 November 2011

Dozens participated in this week’s demonstration in Nabi Saleh against the theft of its lands and spring by the Halamish Israeli settlement and the Israeli occupation that sustains it. Nabi Saleh residents, other Palestinians, and international and Israeli supporters marched peacefully from the center of the village.

This demonstration followed days of Israeli complete siege over the village and a massive night raid, resulting in the arrest of three people from the village.

As always, a peaceful demonstration met with Israeli army attack. Volleys of tear gas canisters were shot on the entire demonstration from a cannon installed on Israeli military jeeps. Sole canisters were also shoot by Israeli soldiers directly at people, in violation of their army’s own regulations. Israeli forces used their “skunk” track, carrying a foul-smelling water cannon. This time the “skunk” wondered around the village and sprayed houses in a blatant unlawful repressive measure.

Few people also threw stones to ward off the Israeli army’s incursion. A group of people managed to approach the soldiers, despite threats of arrests.

One youth was injured in the forehead by Israeli rubber coated bullet. He was helped into an ambulance that took him to hospital.

Dozens participated in this week’s demonstration in Nabi Saleh against the theft of its lands and spring by the Halamish Israeli settlement and the Israeli occupation that sustains it. Nabi Saleh residents, other Palestinians, and international and Israeli supporters marched peacefully from the center of the village. Referring to recent news, demonstrators called for Hamas and Fatah reconciliation in order to boost Palestinian struggle against the settlements, annexation wall and occupation.

As always, a peaceful demonstration met with Israeli army attack. Volleys of tear gas canisters were shot on the entire demonstration from a cannon installed on Israeli military jeeps. Sole canisters were also shoot by Israeli soldiers directly at people, in violation of their army’s own regulations. Israeli forces used their “skunk” track, carrying a foul-smelling water cannon, which said to be of different “flavor” this time, according to protesters. However, the “skunk” couldn’t reach but few people due to a rocks-made protesters road block that prevented it and all other military jeeps from deepening their incursion into the village. Few people also threw stones at the army’s position and managed to ward off some soldiers advancing on foot from a different direction.

At least 3 people suffered from minor injuries from the Israeli attack. One protester who suffered from gas inhalation was carried by others a few dozen meters until they reached a road, where an ambulance waited to rush him out for medical treatment.

The demo, which was accompanied by a rainy cold day, lasted about 3 hours, after which the army retreated to its post at the main entry to the village.

Residents of Nabi Saleh were surprised to find a group of soldiers attempting to ambush local youth at a private backyard during the weekly demonstration.

A few days after welcoming released prisoners, residents of Nabi Saleh went on their weekly demonstration.  Joined by Israeli and international supporters, residents called for the release of two members of the local popular committee, Bassem and Naji Tamimi, whose trials are currently taking place at the Military Court at Ofer Compound.

The march commenced from the center of the village, shortly after the prayer. The few dozen protesters marched through the village down to the main road. They aimed to reach the village’s lands and the spring that has been confiscated by the adjacent settlement Halamish.

Upon reaching a distance of approximately 100 meters from the village, the march was violently blocked by the army, which began shooting large amounts of tear gas projectiles and rubber coated bullets. The army also tried, largely in vain, to use what is known as the “Skunk”, a truck shooting foul-smelling water.

Following this, clashed erupted between local youth and the army, which entered the village and took over a private patio to ambush the youth. This effort was also quite unsuccessful, as the ambush was shortly uncovered.  A number of demonstrators were hit by tear gas canister and rubber coated bullets, however no severe injuries were reported.