The boy, small and frail, is struggling to stay awake. His head lolls to the side, at one point slumping on to his chest. “Lift up your head! Lift it up!” shouts one of his interrogators, slapping him. But the boy by now is past caring, for he has been awake for at least 12 hours since he was separated at gunpoint from his parents at two that morning. “I wish you’d let me go,” the boy whimpers, “just so I can get some sleep.”
During the nearly six-hour video, 14-year-old Palestinian Islam Tamimi, exhausted and scared, is steadily broken to the point where he starts to incriminate men from his village and weave fantastic tales that he believes his tormentors want to hear.
This rarely seen footage seen by The Independent offers a glimpse into an Israeli interrogation, almost a rite of passage that hundreds of Palestinian children accused of throwing stones undergo every year.
Israel has robustly defended its record, arguing that the treatment of minors has vastly improved with the creation of a military juvenile court two years ago. But the children who have faced the rough justice of the occupation tell a very different story.
“The problems start long before the child is brought to court, it starts with their arrest,” says Naomi Lalo, an activist with No Legal Frontiers, an Israeli group that monitors the military courts. It is during their interrogation where their “fate is doomed”, she says.

END_OF_DOCUMENT_TOKEN_TO_BE_REPLACED

Protesters marched holding a tent to tell the Israeli protest movement that their demands for social justice must include implementing the rights of Palestinians.

The second weekly protest of the week of Ramadan in the village of Nabi Saleh was dedicated to reminding Israeli protesters that a true movement for social justice could not ignore the Palestinians.

The demonstrators carried a tent with them, similar to the ones that became the symbol of the protests in Tel Aviv and other cities across Israel.  As the march broke from the village’s main road towards the village’s lands, over which settlers try to take over, they were attacked by two groups of Israeli Border Police officers who shot tear-gas projectiles at them from two different directions. Forced to return to the main road, the protesters tried to set the tent there, but were attacked with tear-gas and concussion grenade once again.

While the Israeli protest movement is widely celebrated as a shining example of Israeli democracy, Similar Palestinian demonstration are violently repressed and communities involved in them are regularly and systematically attacked by the Israeli army. 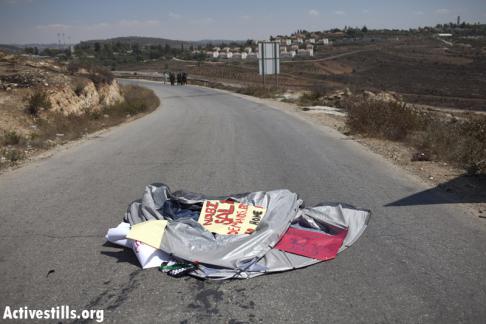 The tent residents of NAbi Saleh set up demanding real social justice, after it was shot at. Picture credit: Oren Ziv/ActiveStils.org

END_OF_DOCUMENT_TOKEN_TO_BE_REPLACED

The Israeli occupation forces attacks on the village of Nabi Saleh continue for the third consecutive day. Today the Israeli army stormed the village and provocatively spread its soldiers within. The soldiers went on to fire tear gas canisters, sound bombs, rubber bullets and live ammo, which led to the injury of dozens and several cases of suffocation. In addition to that, the Israeli occupation forces fully closed the three major entrances of the village, preventing cars from entering or leaving the village.

The IOF, as usual, indiscriminately targeted houses in order to disturb the daily activities of the villagers during the holy month of Ramadan. Clashes  between the angry youths of the village and the Israeli soldiers, wounding several soldiers after being sieged in one of the alleys in the village. Moments after, another big group of soldiers arrived at that the same ally and started targeting homes and cars, while the pedestrians and villagers were dragged into a scenario of a battlefield.

The Palestinian People’s Resistance Movement in the village of Nabi Saleh holds the occupation responsible for the continues raids on the village, saying that such attacks reflect the inability and moral bankruptcy of the army. The movement states that the IOF attacks on the village during the month of Ramadan, along with the increase of attacks against citizens, civilians, and the imposed closures and the establishment of barriers, hold evidence of failure, anxiety and fear in the army and its leadership. The movement confirms that the struggle of the people and the village goes on and will never stop despite such practices, which have as purpose of terrorizing the village and creating tension. Tension that the IOF hopes that will weaken the support for the popular resistance, by such actions the army hopes that the project will not bear fruit. On the contrary, our belief in the need for resistance and resilience is much stronger.

We believe that resistance is absolutely necessary and irrevocable until the restoration of our rights. The movement calls upon all the masses to stay steadfast and hold on being strong until the establishment of an Palestinian state with Jerusalem as its capital.

Reports from Tamimi Press indicate that Sunday evening the Israeli army invaded the Palestinian town of Nabi Saleh in the West Bank. They fired live ammunition and gas bombs and clashed with local youth.

The Israeli forces were described as “firing ammo and gas canisters indiscriminately on homes.”

In addition to the soldier attacks, Israeli settlers from the illegal settlement Halamish attacked cars on the main road of Nabi Saleh.

No reason or justification for the Israeli invasion has been given, and there are no confirmed reports of any injuries yet.

Nabi Saleh has been attacked many times in recent weeks by settlers and the Israeli army.

Local, international and Israeli activists gathered in Nabi Salih (النبي صالح‎) on Friday, 15 July, to demonstrate against the Israeli occupation and the encroachment of illegal settlements on Palestinian land near the village.

The now-weekly protests at Nabi Salih are often cited in the Israeli and international press as an example of the disproportionate use of force by the Israeli army against what is a mostly peaceful crowd, one that poses no real danger to heavily armed soldiers.

“They began to attack us violently because they don’t want us to become a model for other villages,” Manal Tamimi, a member of the popular committee of Nabi Salih, explained.

END_OF_DOCUMENT_TOKEN_TO_BE_REPLACED

Muheep Barguthy, a photojournalist from Al-Hayat, and David Cronin, an author and correspondent for the International Press Service, were arrested in the village of Nabi Saleh last Friday, during a weekly demonstration. Three Palestinian villagers, Eyad Tamimi, Rafat Tamimi and Malik Tamimi were also arrested.

Last Friday, international and Palestinian activists witnessed what has become routine in Nabi Salih—the disproportionate use of force used by the Israeli army against demonstrations in the village.

Protests in Nabi Saleh started in 2009 in response to the illegal seizure of the land surrounding the village—including the spring named Ein al-Qaws—by the nearby settlement of Halamish. Before that, the spring was owned by a Palestinian resident of the village, Bashir Tamimi.

By seizing control of the spring and its surroundings—and denying Palestinians access to their land—the Israeli settlers, who receive significance support from the Israeli army, have taken almost all resources away the residents of Nabi Salih.

This tactic is nothing new.

END_OF_DOCUMENT_TOKEN_TO_BE_REPLACED

If you seek to obtain a truly comprehensive picture of the state of press freedom and freedom of expression in territories under Israeli control, come watch Israeli soldiers shoot at journalists in the West Bank.

On Friday, 29 July, at the start of the weekly Palestinian demonstration in the West Bank village of Nabi Saleh, Israeli army infantry reservists opened fire with riot-control weapons on a group of some 10 press photographers.

This attack crossed a red line.

The troops had just repelled a march of several dozen Palestinian, Israeli and foreign protesters with a few rounds of tear gas grenades and forced them back towards the village’s central square and out of view. The only individuals on the street visible to the soldiers at this time were photographers. They carried multiple still and video cameras and tripods and they wore unique blue flak jackets and helmets marked with “PRESS” or “TV.” The distance between the journalists and soldiers was less than 100 meters and visibility was clear.

Photojournalists working in the West Bank are used to being caught in the cross-fire, and are sometimes hit by rocks thrown by Palestinians or by various types of ammunition fired by Israeli troops. This is part and parcel of the job and rarely does anyone make an issue of it.

This is the first time I am speaking publicly about any perceived abuse of the media by any side involved in this conflict.

When once punched in the face by a Fatah activist a number of years back, I kept my cool and simply resumed working. I also kept my mouth shut earlier in July, when a Border Police officer in Nabi Saleh fired a tear gas grenade directly at me, hitting my camera and left hand at a time when I stood alone in the street while Palestinian protesters were located behind the rise of a hill at a distance of several hundred meters.

But here is the difference: the attack of 29 July was intentional and sustained and the troops were fully aware of what they were doing. I had never before come under a sustained, direct and intentional attack by an Israeli military force aimed directly at me and at fellow journalists.